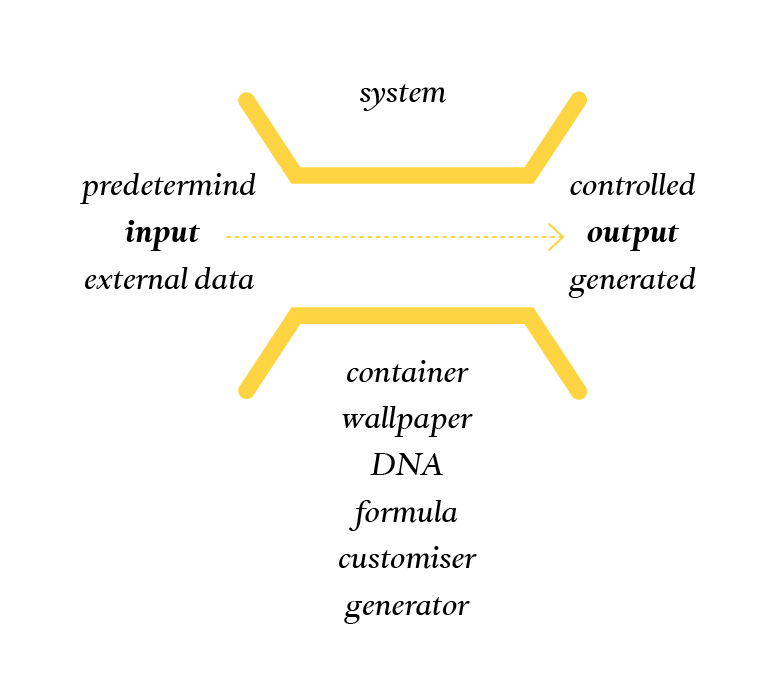 A logo, a set of colours and a font, that’s all  it takes to create a visual identity. At least, that’s how designers have set to work for a long time. There has been a shift in recent years towards creating more organic identities, using more and variable elements. New technologies have made this possible, combined with a shift from print to screen.

Although we still exchange business cards, most interaction today takes place online. This gives brands the opportunity to create a much more vivid and variable identity, using a different logo each day if they wish. Internet, social media and technical revolutions have given brands the opportunity to behave like living organisms. It has also created the possibility for companies to come closer to their clients and vice versa. These new forms of interaction feed a company and should be expressed within its identity.

An identity should reflect the values and aims of a company as a whole. What drives it, what it believes in, why it exists. This is not something static, frozen in time. It is always evolving, growing, adapting to new circumstances.  A person has a vision, a wardrobe and a circle of friends evolving and changing as they grow up, meet other people, travel, live. In the same way, a company is also an organic entity: influenced by, adapting to, and changing through economic and social circumstances, the vision of a new CEO, or a major technological breakthrough.

Learning companies are dynamic and should therefore have a dynamic identity that is flexible enough to meet all these changes, to incorporate and reflect them. An identity should be as organic as the company it is designed for; it should speak its language, grow with it, and adapt to its environment.

The way I see it, there are six components to an identity. A logo is one of them, colour and typography makes three, and then there are graphic elements, imagery and language. Together they form a system that builds the identity of the brand.

Apple, for instance, fixes the logo (the apple), the colour (black and white), a font, and developed a unique language with the i-products (iPod, iPhone, iPad, …), creating a strong branding system. Levi’s and T-Mobile both claim a colour. You can recognise the red label on the side of the back pocket of a pair of Levi’s jeans without having to read the label.

Each component helps sharpen the identity of the brand it represents. The more components are defined, the more specified the identity becomes. But within these limitations, there is definitely room for more freedom.

Moving logos have been a trend lately. The restyles of UPC and Swisscom, for example, have resulted in an animated logo. However dynamic their new logos may seem, I see them as nothing more than a moving version of a static logo. Creating a dynamic identity requires much more freedom than just movement. For example, one or more of the components could consist of different variables, adding flexibility to the identity. Fixed components help the user recognise their brand; it is the variability that gives it room to live and evolve.

Fixating at least one recognisable component can leave room to play with the others, creating a dynamic identity. This is nothing new. One of the first to take the leap was Manhattan Design, who created an identity for MTV in 1981. They created a system where ‘M’ and ‘TV’ have a fixed shape and position, but can be built with thousands of variations of colours, patterns, textures, animations and illustrations. All of its iterations have only served to strengthen the youthful vibe that is synonymous with MTV. In 1994, Bruce Mau Design projected a fixed wordmark of the Netherlands Architecture Institute (NAi) onto a range of surfaces and materials, maintaining consistency while communicating the diverse activities and ambitions of the NAi. Today, this system of a container ‘holding’ content is still a common way to create a variable identity.

A similar system is placing a wallpaper behind a fixed item. Wolff Olins created this type of dynamic identity for Aol. Behind the wordmark ‘Aol.’, a space is created that forms a platform for artists. Each time, different artwork is selected from a monitored data bank of images created by artists around the world. Visitors of the website can even select their favourite to use.

It does not necessarily have to be the ingredients, such as the four black and white pixels that form the DNA of IDTV, that form the identity. It could also be a set of rules, a formula. Back in 1998, the Google Doodles were created when Google founders Larry and Sergey played with the corporate logo to indicate their attendance at the Burning Man Festival. The identity formula – a set of colours in a particular order and a vague shape of the wordmark – still stands, daily commemorating interesting events and anniversaries. In a similar fashion, New York’s New Museum could communicate their different exhibitions and events each day due to its system of leaving a space between ‘New’ and ‘Museum’ that can be filled in endlessly. The formula could also be a fixed language in combination with set typography and colour. Take the Nikolaj Kunsthal, for example, a Danish art centre which Scandinavian Designlab personified and gave it a language/tone to speak in. Because it is located in a former church, they let it preache its passion for art through biblical quotes:
“Let there be art” and “May art be with you”.

Predetermined input leads to controlled output. Opening up one of the components and letting it be influenced by external input can lead to more living results. Take for example the OCAD University, where the identity holds actual student art and design. The logo literally becomes the display window for the students, customised to the graduating student medal winners ach year.

A much less controlled and much more recent technique is the generative approach. The identity of the Scandinavian peninsula Nordkyn designed by Neue, for example, uses real-time data coming from a weather station to build their identity. For the identity of the Japanese television station TV Asahi, Tomato had let the identity be reactive to sounds recorded at a certain location. Both these ‘generative’ identities are created with scripted tools, a gift of modern technology. When using real-time data to feed a number of parameters, artwork is generated that forms the identity. It is basically a technical tool: once programmed, the computer does the work. This may feel like a trick, but it is one that can be performed in many different ways. When the input is generated by live information, the identity reflects the world it is living in and adapts according to its real-time input. It becomes alive.

Possibilities for this input are numerous: time, the activity on a site or in a building, live tweets, stock information, the news, the number of visitors to a museum, anything really. The less controlled the input, the more alive the identity, keeping in mind that there should always be a constant that makes the identity recognisable. Losing touch is a danger inherent to dynamic identities, so avoiding that pitfall should be a priority for the designer. The trick is to create
as much room for dynamism as possible, while maintaining recognition.

So is this generative approach enough to create a living brand? I feel that we’re only at stage one; despite the huge potential offered by current technology, there is still vast room for improvement. Perhaps the next step in creating a living identity goes beyond the external live input that flows through the tool, letting the tool itself be influenced by external input. Making it a learning tool that is able to evolve over time, shifting from a ‘live’ identity to a truly living identity.

Knowing that brands need to constantly adapt to their fast-changing environment in order to survive, why do so few companies have a dynamic identity? Yes, institutions and organisations in the cultural sector and the creative industry have embraced the concept of dynamic identities. The Casa da Musica concert hall in Portugal, the New Museum and the Brooklyn Museum in New York, big players in the media and entertainment industry such as MTV and Google, and forward-thinking research and educational institutes such as the MIT Media Lab and the Design Academy Eindhoven. These are only a few of the numerous examples presented in this book. However, other sectors are still trailing behind. The financial industry for one, and insurance companies are another example: industries where reliability seems to be an important value. Perhaps dynamic identities seem too whimsical to these more traditional organisations.

But there might be another issue at hand. A dynamic identity is hard if not impossible to patent. Companies might be afraid to take a leap with a corporate identity they cannot protect under current intellectual property legislation. In this fast-changing world, IP laws are not adapting fast enough. Should progressive companies and designers wait until lawmakers have caught up? Of course not. There is no time to waste. We live in a dynamic world. Maybe not every company is ready for a dynamic identity, but more and more will cross that line; the future will be more dynamic than ever!